Posted on March 12, 2015 by Janice Friedman in Nutrition Facts

The world, they say, is getting smaller every day. Local food and farmer’s markets are gaining a lot of ground as people become more environmentally and health conscious, which is great. But the age of globalization does have it’s upsides. One is that we’ve now got access to all kinds of exotic fruits that could very well blow your mind.

Sadly,  most of us haven’t explored the full and exciting range of fruits available to us in this modern age. There’s nothing at all wrong with apples and oranges . But you only live once, so get out there, and try some of these freaky foreign fruits. 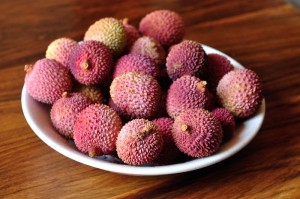 These rough little berry like fruits have been grown in China for about 2000 years. Lychee aren’t exactly the most nutrient-rich of foods, but they are high in vitamin C and antioxidant polyphenols.

To a Western tongue, lychee have a complex taste. They could be described as a sweet floral grape, but there is also somewhat of a sour taste in there too. The challenge of describing the taste of a fruit someone has never tasted before is that everything has its own unique thing going on. So you’ll just have to get out there and try it.

Lychee can often be found in Asian supermarkets, though it is popping up in standard markets now too. Sometimes dried lychee are sold as ‘lychee nuts’. 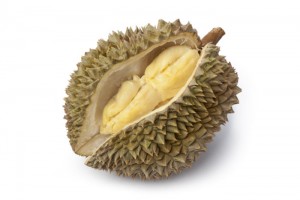 Durian is a popular fruit in Southeast Asia, where it is sometimes referred to as the ‘King of Fruit‘. Looking at them, it seems an apt name. These big spiky things can weigh up to 7 pounds, and measure up to 12 inches long.

But their size and appearance isn’t their most famous quality. Somewhat ironically considering their popularity, durian are famous for having a very peculiar smell. These things have a powerful odor, even when the husk is intact. While some people find the aroma mildy pleasant, many find it simply awful. Probably most people.

So awful, in fact, that they are apparently banned in certain public places. Yet despite their malevolent odor, durian have been a much beloved fruit for centuries for their very unique taste. It’s quite hard to describe. It’s almost like… watermelon and garlic. Or apples and cucumber. Or all of the above.

Whatever it is though, it’s neat. And this big smelly exotic fruit is gaining in popularity here. It can be found in smoothies and Asian markets throughout the nation. Just be considerate if you have to take it on the bus! 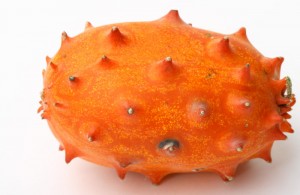 These things are so cool. Just look at them. They look like the fruit version of Darth Maul, and with the botanical name Cucums metuliferus,  it sounds somewhat nefarious. But actually, kiwano melons are quite lovely.

Looking at these things, it’s obvious that they almost certainly came from out space. But if you think the outside is strange, just wait ’til you get to the inside. 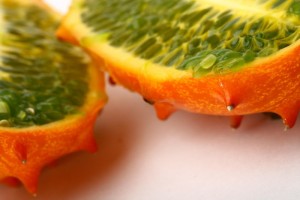 The picture looks pretty cool, but it doesn’t tell the whole story. These wonderfully strange fruits that are orange and spiky on the outside, are full of gelatinous green seed pods on the inside. Think cucumber-flavored pomegranate seeds, but instead of little red berries the soft seeds are swimming in nature’s Jello.

Again, the flavor is difficult the characterize. It’s sort of like cucumber, lemon and apples. But really, it’s got its own thing going on. 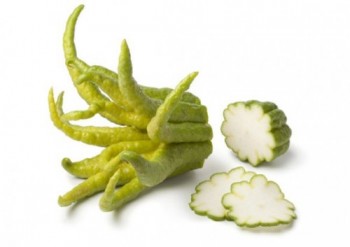 That’s a pretty unique looking piece of vegetation. Also called the Fingered Citron, these freaky fruits come in open fingered (as seen above) and close fingered varieties. Like most citrus, Buddha’s Hand hails from the Far East where it has been used to bring a pleasant fragrance to Buddhist temples.

As citron, these tentacled tree fruits make for an intriguing substitute in situations calling for lemon. But unlike lemon, these interesting fruits have no juicy flesh. That’s right: they’re all rind!

So what are you supposed to do with it? Traditionally it has been used as a perfume, and hung up in homes as a natural air freshener. They also make great a zest to add some zing to all kinds of dishes and concoctions. Simply use it anywhere you might use lemon zest.

If you’re a bit more adventurous or if you really like citrus, you can also eat the fruit raw. In small doses, it can actually be a pretty refreshing light snack. You can cut the fingers into strips or into little bit-sized chunks. 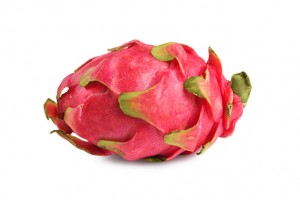 Less regularly known as Pitaya, the Dragon Fruit is now pretty commonly available at grocery stores in the U.S. Originally from Columbia, Dragon Fruit are now cultivated in tropical regions around the world.

While they do kind of look like the egg of a dragon, these things are actually the fruit of a cactus. Pretty neat.

They may look pretty extravagant, but these flashy fruits actually have a pretty mild sweetness not unlike a melon. In addition to being beautiful and tasty, Dragon Fruit is low in calories and a good source of iron and vitamin C. 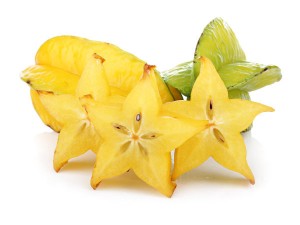 Can you tell why they call them Starfruits? They’re also technically called Carambola, though I doubt you’ll hear it come up much.

When not providing power ups to Nintendo characters, these fruits can be found on trees throughout Southeast Asia. They can also be found at many markets here in North America.

Starfruit can be eaten like an apple, flesh and all. They have a sweet, tart taste, with a hint of kiwi. Starfruit are super juicy and have a similar consistency to grapes. And with less than 4% sugar content, they make for a great snack.

Cut into slices, these things make an absolutely awesome addition to a fruit salad or spread. They’re characteristic shape is bound to impress. Rich in antioxidants, potassium and vitamin C, this is a fruit we should all be more familiar with. 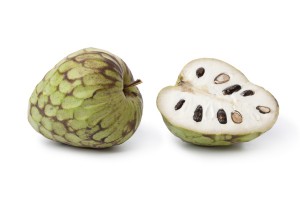 This fruit, native to the Andes region, is now grown around the world. It is said that Mark Twain once referred to it as “The most delicious fruit known to men.” It’s a shame most Americans haven’t tried it!

If such high praise from a literary genius hasn’t piqued your interest, consider it’s second name: the custard apple. You wouldn’t just call anything a custard apple. These things have got to be special.

The flavor is often described as being a mix of pineapple and banana, or as a strange strawberry. The soft flesh can be eaten with a spoon, which makes it pretty fun. It’s also full of antioxidant polyphenols, Vitamin C, B-complex vitamins (particularly B6). 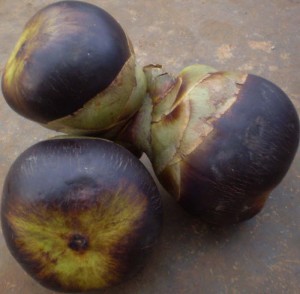 It may not look like it, but beneath that thick husk are giant edible jelly seed pouches. They’re kind of like giant versions of what you’ll find in the kiwano melon described above, but tasting more like lychee.

The palmyra fruit is popular for making sweets in Bengal, but the translucent seed sacks are also a popular raw snack across the Indian subcontinent and beyond.

Also called sugar palm on account of pleasant taste, these exotic fruits are also high in nutrients. They’ll provide you with vitamins A, C, and B-complex, as well as zinc, potassium, calcium and iron. Palmyra fruit is also reportedly anti-inflammatory and anti-oxidant.

So there you have it. No more excuses for boredom! There are plenty of other delicious exotic fruits than these, and each one has it’s own peculiarities. So be adventurous! Try something new, and grab the strangest fruit you see next time you go shopping.