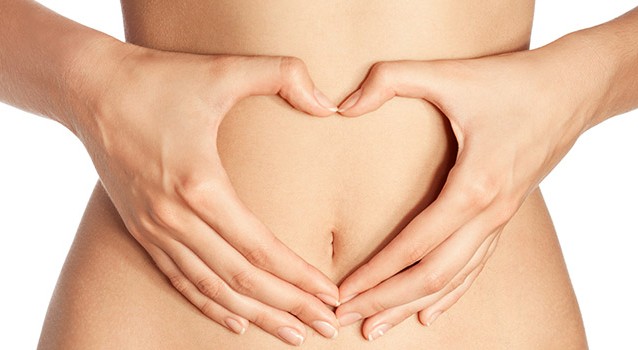 5 Simple Ways To Get Your Probiotics Every Day

Posted on February 26, 2015 by Janice Friedman in Probiotics

Over the past few years, there’s been a growing interest in probiotics. If you watch TV, you’ve surely seen advertisements featuring smiling women excitedly dancing with the newest brand of probiotic yogurt, and you’ve probably seen the term printed on all sorts of dubious supermarket packages. But what exactly does it mean to be probiotic? Is it something you need, and how do you get it?

The quick answer is that yeah, probiotics (or beneficial microorganisms) are in fact really good for you, and should be included in your diet. And while the term may have exploded into the public consciousness only recently, we’ve actually been consuming them basically since the dawn of time.

It’s actually very easy, and not at all expensive, to get the benefits of these tiny little creatures as part of your regular nutritional program, and we’re gonna tell you how to do it with a raw lifestyle. But first, a little background on what these probiotics do.

If you think about the word, it’s pretty easy to get an idea of what we’re talking about. Pro-biotics: good organisms. That is, in a nutshell, what the term means. When people talk about probiotics, they’re essentially referring to any microorganism that performs a beneficial role within the human digestive system.

These tiny heroes actually aren’t unique to humans at all. In fact, every animal (and even plants!) rely on these microscopic allies just to get on with our daily lives. And there’s a lot of them. In fact, recent research suggests that there could be ten times more bacterial cells in your body than human cells, representing over 500 different species.

In a world of antibacterial soaps and life-saving antibiotics, this is a bit of a paradigm shifter. It turns out that a lot of the stuff we were brought up thinking about “germs” isn’t actually all that true. Sure, some bacteria can make you sick and do other nasty things. But most of them aren’t really hurting anybody, and some of them are maybe our closest friends.

Scientists are only beginning to pull back the curtain on this invisible ecosystem in our guts, but already they’re finding out about some pretty amazing tricks these modest microbes have been performing on our behalf.

For example, one of the most common probiotic bacterium, Lactobacillus, has been shown to help with bowel disorders and aid digestion. But one of the most fascinating things that researchers are discovering is the impact beneficial bacteria have on the immune system.

There’s a growing awareness of the potential dangers of overusing antibiotics. Partly this is because it can encourage the development of drug-resistant diseases, but it’s also because antibiotics actually weaken our immune system. Not unlike pesticides, antibiotics don’t distinguish between the “good” and “bad” critters, and so they can hurt our friends too. And scientists are finding that one of the major roles of probiotics is boosting our immune system. That makes them particularly valuable for anyone that has been on antibiotics, as they help restore a healthy gut ecosystem.

It all sounds pretty amazing right? But before you go out to drop your paycheck on supplements and processed foods, read on. These helpful little creatures actually exist all around us (and within us), and you can incorporate them into your diet holistically very easily and with minimal expense. In fact, you might already be doing it.

How to Get Your Probiotics: The Magic of Fermentation

People have been fermenting foods for a very, very long time. Cultures all over the world have developed their own techniques and tricks. Different people ferment different things, but pretty much everyone ferments something. From burying meat in the ground to ferment over several weeks, to barreling grape juice to turn it into wine, people are willing to ferment pretty much anything.

While there is a growing resurgence in fermentation nowadays, the practice had declined a bit in Western culture in recent decades. This is basically because we invented fridges. Aside from being able to get drunk, the main reason why cultures the world over have developed fermentation was to preserve food. Cucumbers will go bad pretty quick without refrigeration. But pickles will outlive your house.

Our clever ancestors may have just been trying to figure out a way to keep all their food from going bad, but they had also stumbled across the miracle of naturally occurring probiotics. Fermentation is actually the metabolic activity of yeasts and bacteria, as they convert sugars into acids or alcohol. When we ferment stuff, we’re basically farming these teeny-weeny beings. In exchange, they get us drunk and pump up our immune system.

It really is quite a beautiful relationship. And if that hasn’t got you thinking about the profundity of ecological connectivity, consider this: the kinds of organisms that turn your compost pile into the soil that feeds your garden are pretty much the same as the microbes helping you digest that extra helping of chocolate pie. What’s good for the goose is good for the goose’s garden.

All this information is particularly useful for those living the raw lifstyle. Unfortunately, a lot of the foods boasting the power of probiotics are pasteurized dairy products like cheese and yogurt. But that’s okay, because you can get all the benefits of of Lactobacillus and the other probiotic superstars from fermented foods, which you can even make at home. Here’s five of the best dairy-free sources of probiotics for a raw food diet.

This list isn’t exhaustive, but all these sources of gut-guarding microbes are easy to find or even to make yourself. Here they are, without further ado, the top five natural raw probiotics: 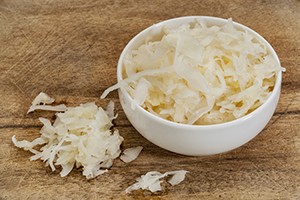 Okay, I know that sauerkraut and kimchi come from different cultures and taste different and are different, I know. But they’re sharing a spot on this list because they are both, in essence, fermented cabbage.

I love cabbage. I love that it comes in different colors and that they are sometimes literally head-sized. Cabbage has been a staple food in the diet many cultures for a long time, and it’s still one of the most popular vegetables in grocery stores and in gardens.

But, it is kind of boring. And sadly, some people find cabbage can be a bit hard on the digestive system when eaten raw — let’s just say, you might not want to eat it on a first date. But what if you ferment your cabbage? The blessings abound:

The hero of this story is our friend Lactobacillus. Don’t be thrown off by the name: this has nothing to do with dairy. The ‘lacto’ in Lactobacillus comes from the fact that these germane germs produce lactic acid. This is the same bacteria found in yogurt and cheese, but it’s actually found all over the place. 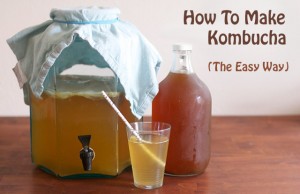 This  superdrink has been taking North America by storm the past few years. There are now several brands with national or inter-national distribution, and you can find it in all sorts of flavors. The health claims abound with this fizzy fermented tea, whose history apparently goes back centuries.

Kombucha, also called ‘mushroom tea’, is created by adding a microbial culture called a SCOBY to a batch of sweetened tea. ‘SCOBY’ stands for ‘symbiotic culture of bacteria and yeast’. Our friend Lactobacillus is yet again at the center of the action, as well as the yeast S. boulardii and others. This culture forms a weird squishy disk which feeds on the sugar added to the tea causing fermentation. This process causes kombucha to be very slightly alcoholic.

After 1-2 weeks in this initial fermentation phase, most kombucha brewers will undertake a second fermentation by bottling the now-fizzy tea with some sort of fruit, which has given rise to the great multiplicity of kombucha flavors. Brewing kombucha yourself is actually not very much more involved than making sauerkraut, and it’s great fun experimenting with new flavors. My favorites so far have been grape-goji-berry and ginger-lemon-cherry.

Every time a batch of kombucha is brewed, the SCOBY miraculously duplicates itself. This means that anyone making the stuff has more SCOBYs than they know what to do with. This is one of the ways to get your hands on a SCOBY if you want to brew your own. As for everything else you need, you can check out Kombucha Brewing Instructions.

Also called Tibicos, water kefir is another symbiotic culture of bacteria and yeasts used to make delicious fermented beverages. As the name implies, it’s a great alternative to milk kefir as a source of natural probiotics. Again we find Lactobacillus, as well as a medley of other bacteria and yeasts.

If kombucha is like a soda, then water kefir is like lemonade. It has a surprisingly mild, pleasant taste that you wouldn’t usually associate with fermented foods. It actually combines well with kombucha, to make a super-duper drink that is a bit mellower than kombucha on its own.

Water kefir is a little bit harder to find in stores than kombucha or milk kefir, though it too is gaining in popularity. As with kombucha, it is quite manageable to brew your own. The SCOBYs are quite different, being more like little pellets than a big spongy disk, and are a little bit less resilient. The process for caring for them though is almost the same. It’s sort of like having a tiny little pet. Except that you don’t have to walk them and you drink their waste. 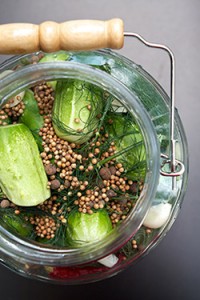 Back in the day, pickles were made by fermenting vegetables using a      method not unlike that used to make sauerkraut. As markets grew and sugar and vinegar became more easily accessible in the 20th century, people stopped using the old methods. Pickles are still awesome, but they often lack the added benefits of probiotics.

Fermented pickles don’t need any vinegar, and they never have to be boiled or refrigerated. Fermented pickles take advantage of the same lacto-fermentation process we’ve been talking about all along. The main difference between pickles and sauerkraut is simply that pickles have additional spices added, and something to keep them crisp. That crispness, which is the key to good pickles, comes from a surprising place: tree leaves.

The chemical that gives the pickles their crunch is called tannin, a very bitter and astringent compound found primarily in leaves.  Any plant leaves with high concentrations of tannin can be used in pickling. Traditionally, people have used grape and oak leaves. 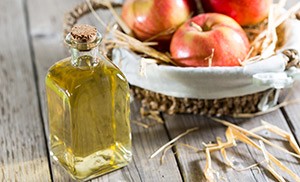 Apple cider vinegar has got to be one of the most commonly recommended natural remedies for just about everything. While many of the claims associated with it have yet to be proven, scientists have found that this fermented elixir does indeed have some palpable benefits.

One of the most useful and proven benefits of ACV is in aiding digestion. Unsurprisingly by now, this characteristic is associated with it’s probiotic content. ACV is apple juice that has undergone two fermentation processes. During the first, yeast and bacteria essentially turn it into apple wine. In the second, different organisms take over, and convert the alcohol into vinegar.

When you’re buying ACV, whether to use it as a supplement or in recipes,  make sure you get organic or unpasteurized vinegar. In this bottle you’ll find what’s called The Mother of Vinegar (vinegar has no father). The Mother, which looks like strands of cobweb, is essentially the SCOBY of vinegar. It’s this live microbial culture which grants apple cider vinegar its probiotic powers, and that’s what you’re looking for.

We hope you’ve learned a thing or two about probiotics.  If you are looking to start one of these healthy stomach helpers then you might want to give Kombucha a try, we created an easy step-by-step system to How To Make Your Own Homemade Kombucha.